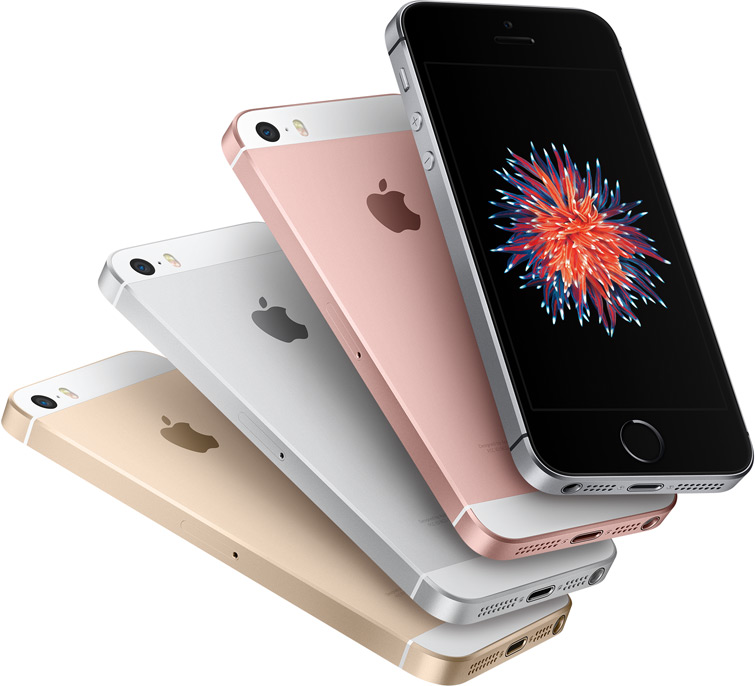 “Our team executed extremely well in the face of strong macroeconomic headwinds,” said Tim Cook, Apple’s CEO. “We are very happy with the continued strong growth in revenue from Services, thanks to the incredible strength of the Apple ecosystem and our growing base of over one billion active devices.”

The Company also announced that its Board of Directors has authorized an increase of $50 billion to the Company’s program to return capital to shareholders. Under the expanded program, Apple plans to spend a cumulative total of $250 billion of cash by the end of March 2018.

“We generated strong operating cash flow of $11.6 billion and returned $10 billion to shareholders through our capital return program during the March quarter,” said Luca Maestri, Apple’s CFO. “Thanks to the strength of our business results, we are happy to be announcing today a further increase of the program to $250 billion.”

As part of the updated program, the Board has increased its share repurchase authorization to $175 billion from the $140 billion level announced last year. The Company also expects to continue to net-share-settle vesting restricted stock units.

The Board has approved an increase of 10 percent to the Company’s quarterly dividend, and has declared a dividend of $.57 per share, payable on May 12, 2016 to shareholders of record as of the close of business on May 9, 2016.

From the inception of its capital return program in August 2012 through March 2016, Apple has returned over $163 billion to shareholders, including $117 billion in share repurchases.

The Company plans to continue to access the domestic and international debt markets to assist in funding the program. The management team and the Board will continue to review each element of the capital return program regularly and plan to provide an update on the program on an annual basis.

Apple is providing the following guidance for its fiscal 2016 third quarter:

Apple will provide live streaming of its Q2 2016 financial results conference call beginning at 2:00 p.m. PDT on April 26, 2016 at www.apple.com/investor/earnings-call/. This webcast will also be available for replay for approximately two weeks thereafter.

This press release contains forward-looking statements including without limitation those about the Company’s estimated revenue, gross margin, operating expenses, other income/(expense), tax rate, and plans for dividends, share repurchases and public debt issuance. These statements involve risks and uncertainties, and actual results may differ. Risks and uncertainties include without limitation the effect of competitive and economic factors, and the Company’s reaction to those factors, on consumer and business buying decisions with respect to the Company’s products; continued competitive pressures in the marketplace; the ability of the Company to deliver to the marketplace and stimulate customer demand for new programs, products, and technological innovations on a timely basis; the effect that product introductions and transitions, changes in product pricing or mix, and/or increases in component costs could have on the Company’s gross margin; the inventory risk associated with the Company’s need to order or commit to order product components in advance of customer orders; the continued availability on acceptable terms, or at all, of certain components and services essential to the Company’s business currently obtained by the Company from sole or limited sources; the effect that the Company’s dependency on manufacturing and logistics services provided by third parties may have on the quality, quantity or cost of products manufactured or services rendered; risks associated with the Company’s international operations; the Company’s reliance on third-party intellectual property and digital content; the potential impact of a finding that the Company has infringed on the intellectual property rights of others; the Company’s dependency on the performance of distributors, carriers and other resellers of the Company’s products; the effect that product and service quality problems could have on the Company’s sales and operating profits; the continued service and availability of key executives and employees; war, terrorism, public health issues, natural disasters, and other circumstances that could disrupt supply, delivery, or demand of products; and unfavorable results of legal proceedings. More information on potential factors that could affect the Company’s financial results is included from time to time in the “Risk Factors” and “Management’s Discussion and Analysis of Financial Condition and Results of Operations” sections of the Company’s public reports filed with the SEC, including the Company’s Form 10-K for the fiscal year ended September 26, 2015, its Form 10-Q for the fiscal quarter ended December 26, 2015, and its Form 10-Q for the fiscal quarter ended March 26, 2016 to be filed with the SEC. The Company assumes no obligation to update any forward-looking statements or information, which speak as of their respective dates.

Apple revolutionized personal technology with the introduction of the Macintosh in 1984. Today, Apple leads the world in innovation with iPhone, iPad, Mac, Apple Watch and Apple TV. Apple’s four software platforms — iOS, OS X, watchOS and tvOS — provide seamless experiences across all Apple devices and empower people with breakthrough services including the App Store, Apple Music, Apple Pay and iCloud. Apple’s 100,000 employees are dedicated to making the best products on earth, and to leaving the world better than we found it. 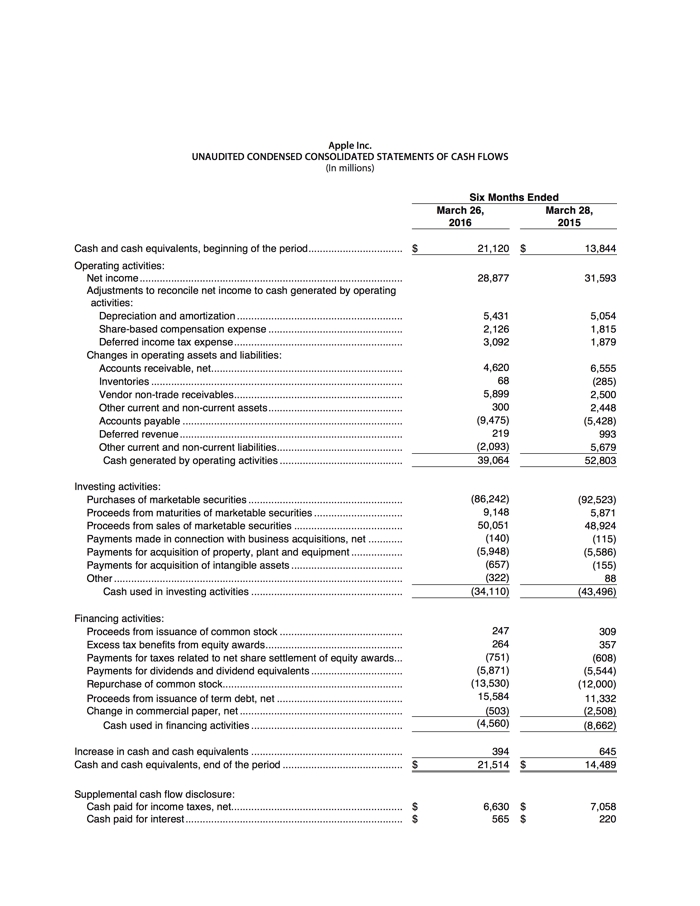 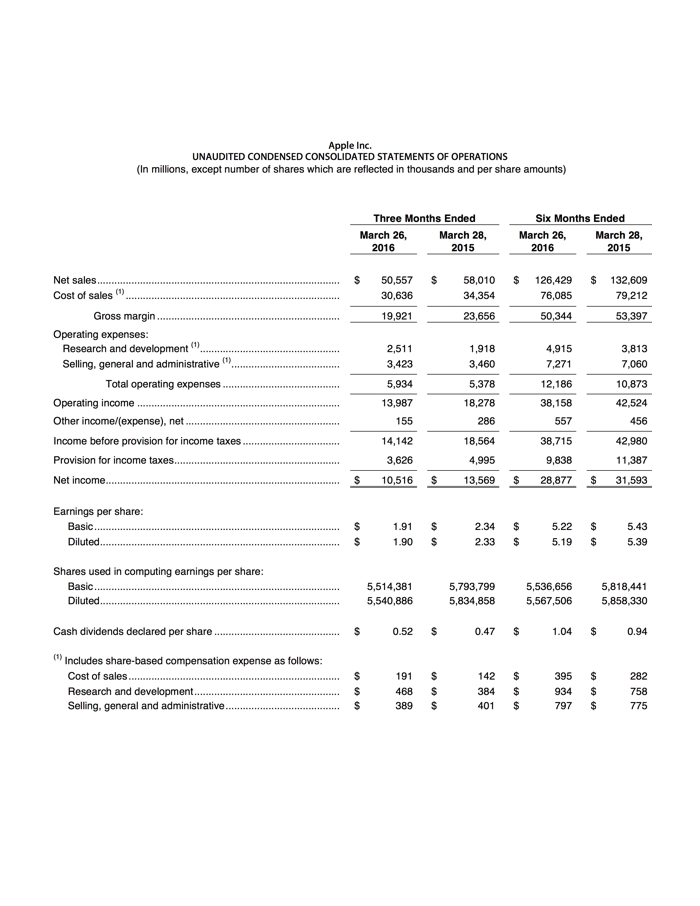 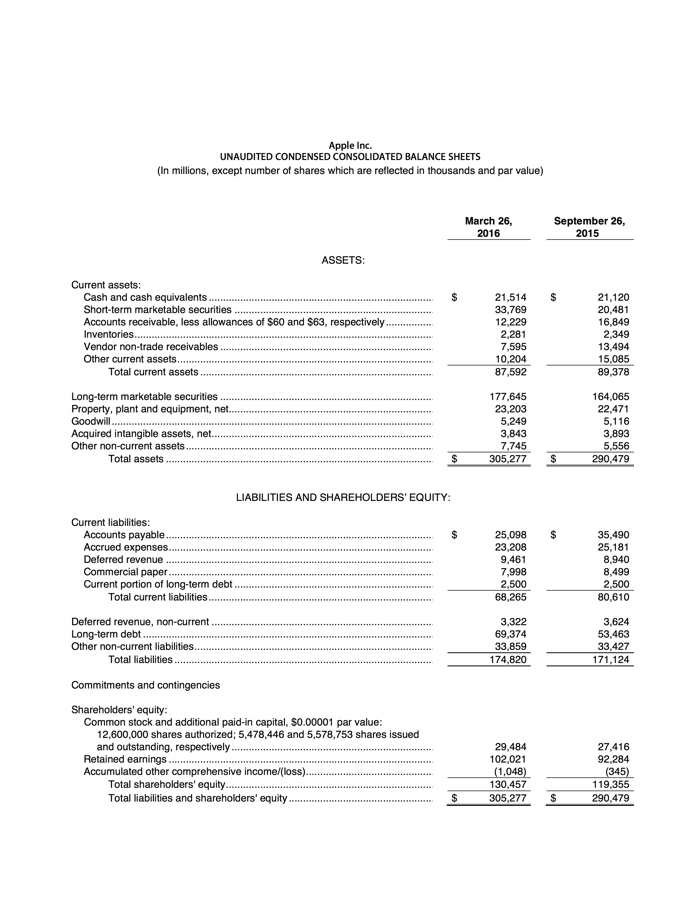